Freedom is a complex topic. German complicates matters with the word frei and derivatives.

I’ll argue there are (at least) three or four general meanings to words based on frei. In some contexts, they seem contradictory, or at least not clearly separate. Native English speakers: before you get all judgy, heads up! We have the same ambiguity in our Muttersprache. Of course that’s because “free” has linguistic kinship with frei, but I think there’s more to it than that. We use “free” in all these ways, too. 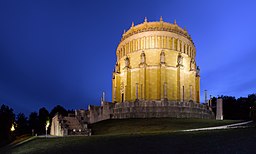 For this meaning of frei, think “Bill of Rights” – freedom of expression, freedom of religion, freedom from oppression, stuff like that. There are places named after this kind of freedom: Münchener Freiheit and Danziger Freiheit come to mind (even though it’s the same place!). The Befreiungshalle in Kelheim probably warrants a visit (we keep meaning to…). King Ludwig I was so happy to be free of the French (i.e., libéré des Français, not les Forces françaises libres) that he had this monument built over 20 years in the middle of the 19th century. 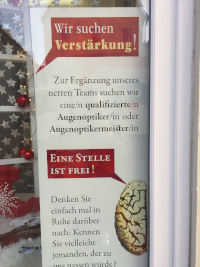 Apparently this brain is hiring bodies.

Anyone who’s been in Germany for ten minutes has learned that phrase. But it’s not just about a place to sit. It can refer to many kinds of availability.

On traffic signs, frei means “the indicated type of traffic is exempt from the rule we just stated.” 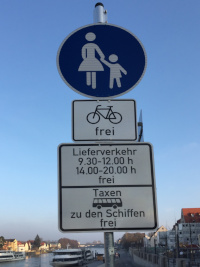 Thus, this waterfront area on the Danube is a pedestrian zone, but bikes are cool. Oh, also delivery traffic at certain times of day. Oh yeah, and taxis can drive up to the ships. But maybe only if they’re bus-shaped taxis?

Beer/pasta/cola with no alcohol/gluten/caffeine in it? That’s a alkohol-/gluten-/koffeinfreies Getränk. That seems pretty clear. But is an arbeitsfreier Tag one on which you are prohibited from working or just a day that lacks work? And it seems pretty clear that a rauchfreies Hotelzimmer is not merely one that has not been smoked in — smoking in one of those is certainly prohibited and will net you a fine.

I bought my mom this Glarkware tee-shirt a few years back. I'm not sure I agree anymore. Life in Germany has taught me it's more of an investment with an intangible pay-off.

Gratis means you don’t have to pay for it. Libre means you can do what you want with it. Frei can mean either (or both) of those things. Freibier is an admirable concept. But despite a superficial resemblance, a Freibad is neither libre (you gotta follow their rules) nor gratis (one of which is paying admission).

“Open-air” is the term I think of when frei is used in connection with a venue. The excellent Österreichisches Freilichtmuseum is a perfect embodiment of this concept. Go visit it on a nice day when you’re near Graz.

Let’s close it out with an important thought going back to the High Middle Ages but more recently put to good use again – might need to that one in our backpocket:

And now, on the last day of the year, here in Germany, it’s getting really close to midnight, so break out those fireworks if you don’t worry about various kinds of pollution and scaring any animals, and …