I think umlauts must be a source of stress for a ton of native English speakers trying not to sound like one of those Ben & Jerry's commercials at the movie theater.

Here's what I mean, if you haven't been in a while:

Actually, to my ears, the 'r' consonant is the most egregious offense (but that's another post).

Part of it must be that it looks foreign. We don't have (much) need for typographical accoutrement. 1 But considering the historical origin of those two dots above an a, o, or u vowel might help you wrap your mind — and mouth — around them. 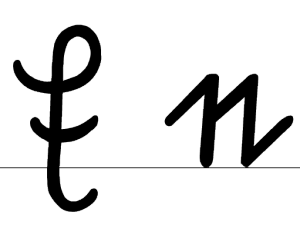 That's a capital E and a lower-case e in the Sütterlin style. Weird, right?
It's just shorthand for the 'plain' vowel next to an 'e'. The extra 'e' was displayed above the main vowel, and in Sütterlin 2 a lower-case 'e' was mostly a couple of short, vertical, parallel lines — a lot like many natives' handwritten umlauts. That evolved into a couple of dots, which mean something completely different in French, but not, allerdings, in Turkish.

Also as such, it's pretty easy to substitute in a normal 'e' where convention dictates an umlaut but technology makes that tricky (like where only ASCII text is permissible or your mom hates it when you change her keyboard settings to allow foreign characters). Danke schoen fuer Ihr Verstaendnis.

How do they sound?

Depending on how many and what kind of consonants follow it, ä sounds just like the Fonz:

Or maybe Fiona Apple as a bad, bad girl:

And sometimes it's just equivalent to a short 'e' sound: siehe aufwendig und aufwändig. Both spelling are acceptable and both are pronounced the same.

Get real posh-like. Received Pronunciation. Say the time on the half-hour:
Not quite hahhf pahhst six; it's nearly six thöty.

Approximate the name of the author of Les Miserables: Victor Hugo. That's for the longer variation. The shorter one is really, really close to the 'i' in the English word 'sick' — start with that sound and ever so slightly nudge the sound away from that 'i' towards an 'u.' That's the shorter one.

What tricks do you use to approximate these sounds?

1. Unless you're the New Yorker magazine, trying to rëestablish a niche for the quirky printed word. ↑
2. Read up on handwriting styles of yore, including Sütterlin, on these two posts of the Brummagemerin's. ↑
The Honourable Husband said on 2014-09-27 08:45:36 +0200:

I find it amusing that when adopting the word "Hey!" into German, Langenscheidt transliterates it to "Hä!"

Häh? is what I see most often for the equivalent of the dumbfounded "huh?" So maybe just the addition of the H at the end is enough to turn an accusatory grunt into an interrogatory one.

This is great!! Very helpful. Thank you :) Entertaining too! And I agree with you about the ‘r’ consonant. That's the one I'm working on (aka struggling with) at the moment. Any tips for that one? Thank you!

That's a great idea for an upcoming post, Dana!